Saiteja is a 16-year-old junior at Westview High School. This is his eighth year participating in FIRST programs and his fifth year doing FTC. Outside of FIRST, Sai loves photography, riding his bicycle, sour food, camping, and pretty much anything physical: especially badminton, where he has won two medals in the Oregon State Games. He also enjoys playing the guitar and flute. In his free time, Sai loves producing music as well as speedrunning a game called “Flow Free” where he holds the most contested world record. This can all be found on his YouTube channel: https://youtube.com/AshrZ

When working with the team, Sai puts his long experience in FIRST programs to use by taking a large role in designing, constructing, repairing the robot, but most importantly, teaching his knowledge to everyone on the team as well. 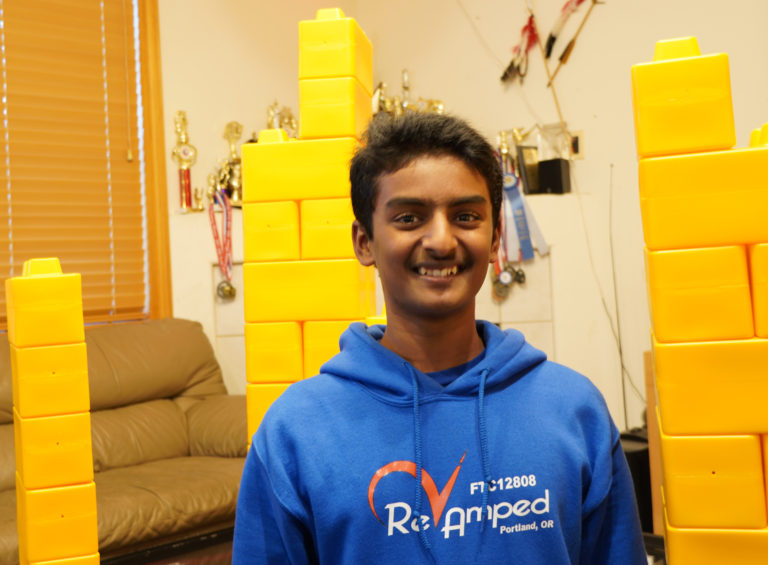 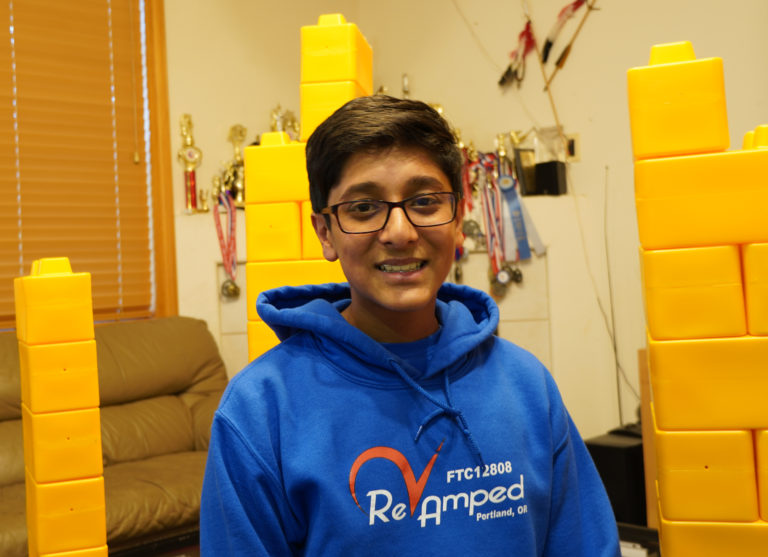 Shrey is a junior at Westview High School. This is his ninth year participating in FIRST programs and his fourth year participating in FTC. Apart from FIRST, Shrey likes to go swimming, play video games, do science, and play the piano. He participates in HOSA and is the president elect for Oregon. Shrey also loves to do Boy Scouts as he leads his local troop as the SPL at the Life Rank. He enjoys camping and hiking with his friends as well.

Kyle is 15 years old and is a sophomore at Sunset High School. This is his third year in FIRST and his third in FTC. He has been a part of RevAmped Robotics for three years, starting as a programmer and for the past two years lead programmer. Outside of robotics, Kyle enjoys learning about algorithmic programming and computer science. He is fluent in Java and C++ and participates in USACO (The United States of America Computing Olympiad) and ACSL (American Computer Science League). He also likes to play tennis and is participating in the Sunset Varsity tennis team where he placed 4th doubles in the district and qualified for state.

Monica is a ninth grader at BASE. This is her 3rd year in FIRST, and also pursued python for two years, participated in the ACSL (American Computer Science League) competition, designing video games, and won first for OGPC 2018-2019 (Oregon Game Project Challenge). In her free time she likes to draw, and listen to music. She also participates in Sunset High School’s colorguard and winterguard programs,

Theodore is a 10th grader at Jesuit High School. This is his fifth year participating in FIRST with two previous years of FTC. Apart from robotics, Theo likes to study history, draw, research about self healing metals as well as other STEM applications, and play video games. In addition, he is currently working on a story idea in his free time that may blossom into a novel in the future.

Karen is a 9th grader at Westview High School. This is her first year in FIRST as well as FTC. Outside of robotics, she likes to self teach herself rollerblade, play basketball in her free time and she is currently participating in the Westview XC team. She likes doing anything revolving physical movement. (as you can tell) She also enjoys playing piano and is preparing and testing for Festival and OMTA Syllabus. Apart from these activities she is passionate about neuro-science and science in general, especially biology

Maansi is a 10th grade student at Jesuit High School. This is her fifth year participating in FIRST with two prior years participating in FTC. Alongside robotics, Maansi enjoys studying discrete math, computer science (particularly Java) and public speaking in competitions, public forums and through tutoring. In her free time, she enjoys dancing, playing volleyball/tennis, reading sci-fi/comics and photography.

Maanya is 12 years old and is in 7th grade at Valley Catholic Middle School. This is her third year in FIRST and her first year in FTC. She participated in FLL and received 2nd at regionals and was awarded the Best Rookie Team Award at State. She also did JFLL in 3rd grade. Outside of robotics, Maanya is Part of the Portland Youth Philharmonic in the Wind Ensemble as well as part of the Track and Field team at her school and got sixth place at the Championships. In her free time Maanya likes to play the flute, read books, play tennis and play volleyball. 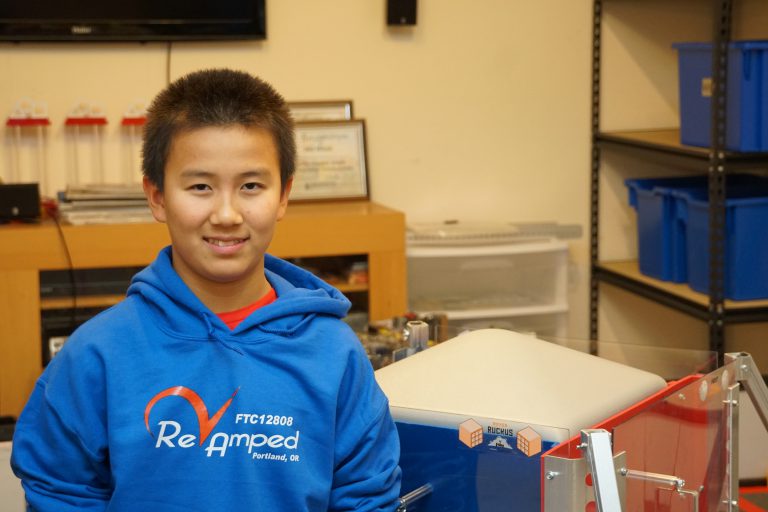 Justin is 13 years old and an eighth grader at Stoller Middle School. It is his second year in the FIRST program as well as FTC. He has participated in ACSL (American Computer Science League) competition, placing first with a perfect score. He also swims competitively and has been for the past five years. In his free time, he likes to play video games, hang out with friends, and read.

Gordon is a freshman at Westview High School. This is his fourth year in FIRST and second doing FTC. When he isn’t doing FTC, he likes reading random books, playing games and designing video games. And in his free time, he loves to solve a bunch of physics problems. 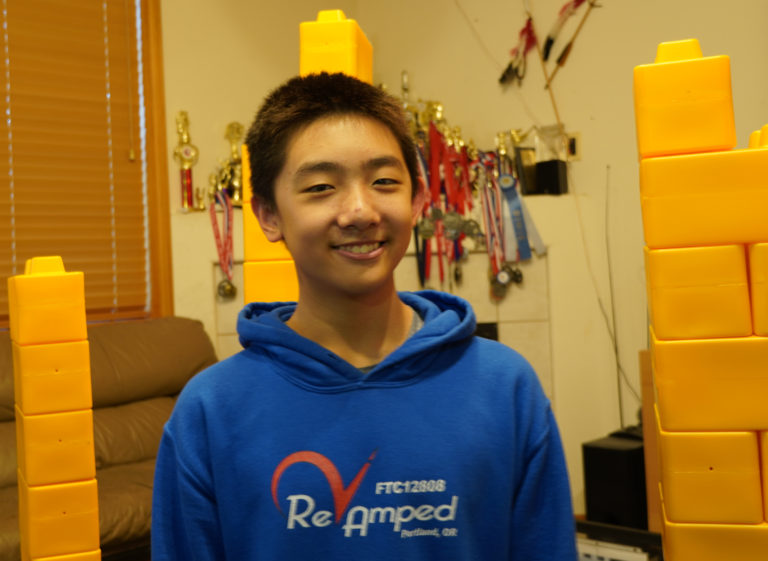 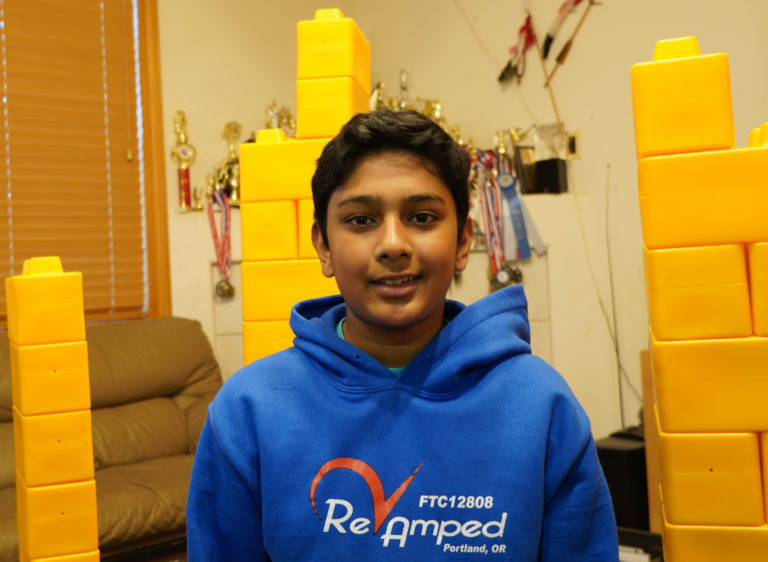 Ekansh is an 8th grader at Meadow Park Middle School. This is his second season of FTC and has been involved in other FIRST programs for four years, starting with FLL. He also enjoys working on his Science Fair Project, winning multiple awards including Best of Fair at the NorthWest Science Expo, the State Merit Award and was placed in the top 30 in the nation in the 3M Young Scientist Challenge. He is also an active Boy Scout where he has completed the Star rank. Outside of school Ekansh enjoys playing basketball, and practicing the clarinet and piano. In his free time he enjoys playing video games and talking to his friends.

Alicia is 12 years old and an eighth grader at Stoller Middle School. This is her first year participating in FTC. She also likes to play soccer and compete in MATHCOUNTS. Alicia has also placed first in ACSL (American Computer Science League) nationally with a perfect score. Alicia also likes to volunteer at the Portland Children’s Museum and Engineering for Kids (EFK) and participate in Science Olympiad. 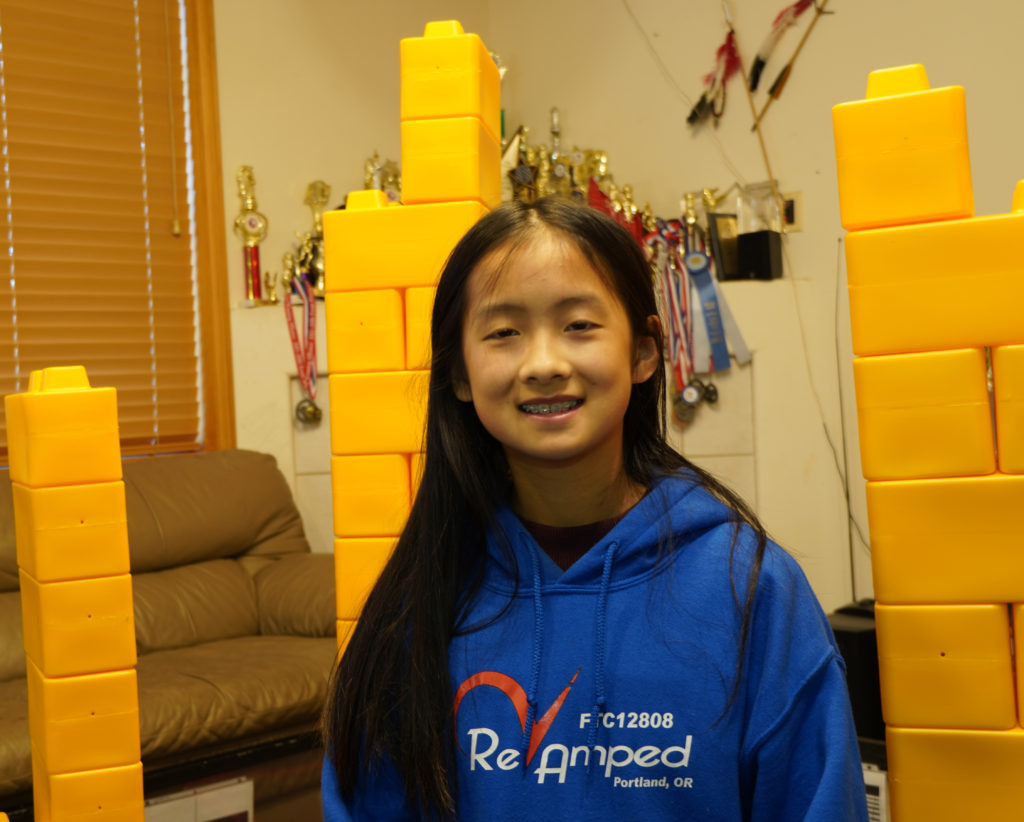 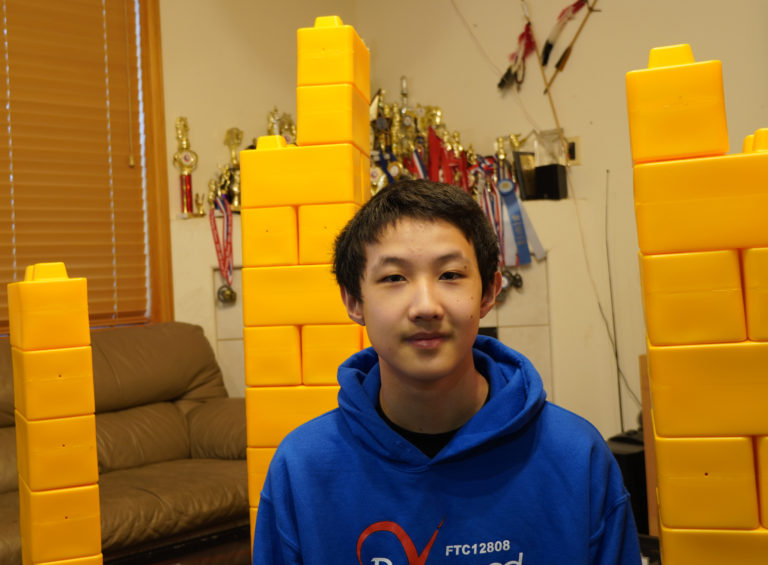 Michael is 16 – or 17 depending on when you read this, and is a junior at Sunset High School. This FTC season is his third year in any of the FIRST programs. Outside of school and FTC, he swims and plays the piano. In his spare time, he enjoys playing video games and sleep in.

Neil is 14 years old and is currently a freshman at Westview High School. This is his first year doing FTC although he has previously participated in FLL for one year and Jr. FLL for a year. Many of his favorite hobbies include reading, playing table tennis, collecting and using remote-controlled devices, and music. Music is a field he is strongly passionate about, as he loves to sing, and is currently learning and playing the Mridangam (Indian drum), the Indian flute, the western concert flute, and even the drum set. Neil is also very enthusiastic about computer science and programming, as he is currently learning Java programming and studied the basics of computer science, such as logic circuits and binary. 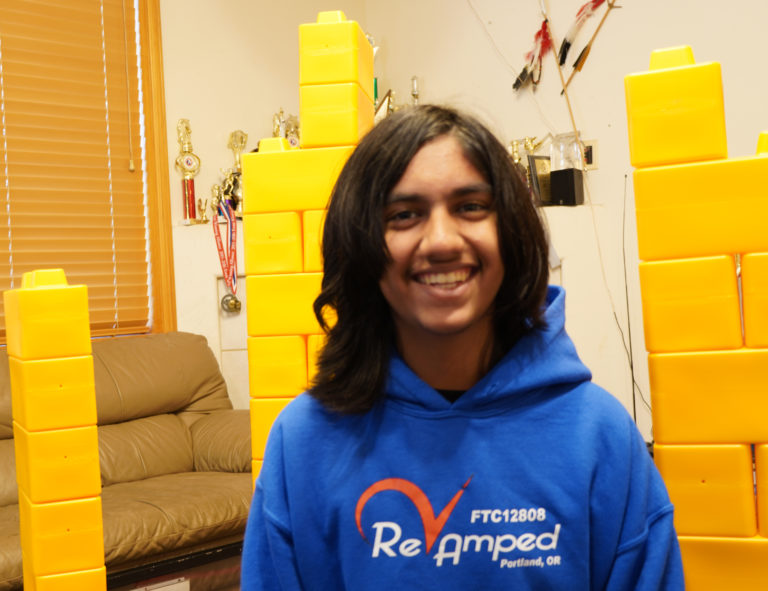 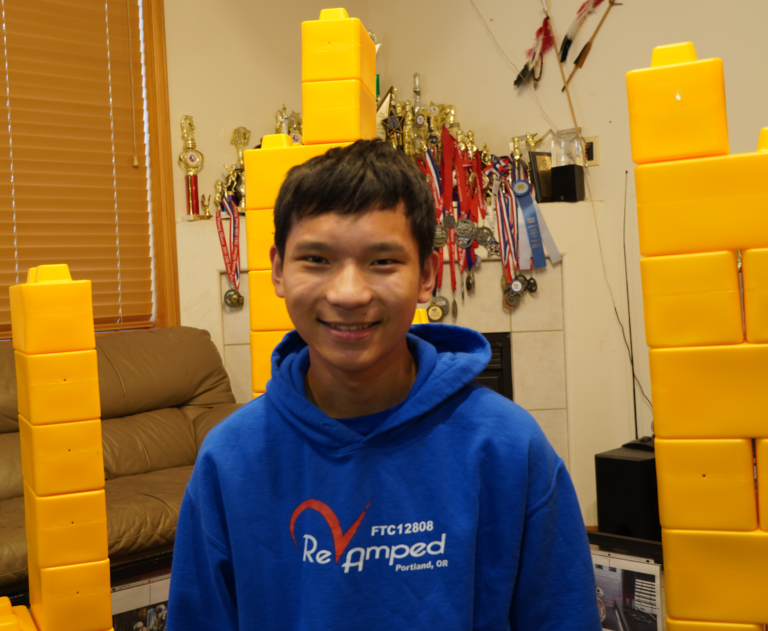 John is a junior at Westview High School. This is his third year in FIRST and FTC. John has been part of RevAmped for the past three years starting as the team programmer, programming lead and now the Captain of the team. Outside of robotics, John enjoys learning more about biology and computer science. He participates in the Math and Science clubs at Westview, as well as Bio Olympiad and Quiz Bowl. He also spends much of his time running as part of Westview’s Varsity XC and Track team.

Mark is 16 and a junior at Sunset High School. This is Mark’s third year in FTC and FIRST. His favorite subjects include mechanical engineering and physics, which he studies in his spare time. He also enjoys participating as part of Sunset’s Science Olympiad team. His hobbies include building things and reading. Additionally, he also likes to play video games and has a twin brother on the team (Michael). 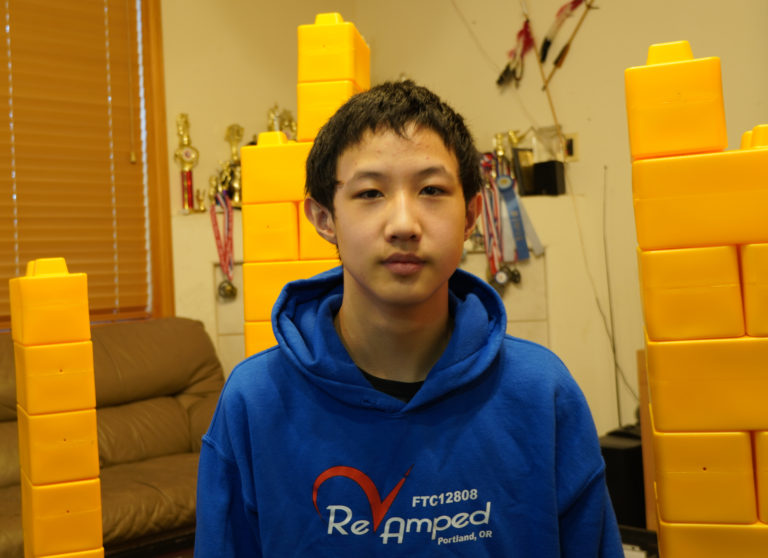 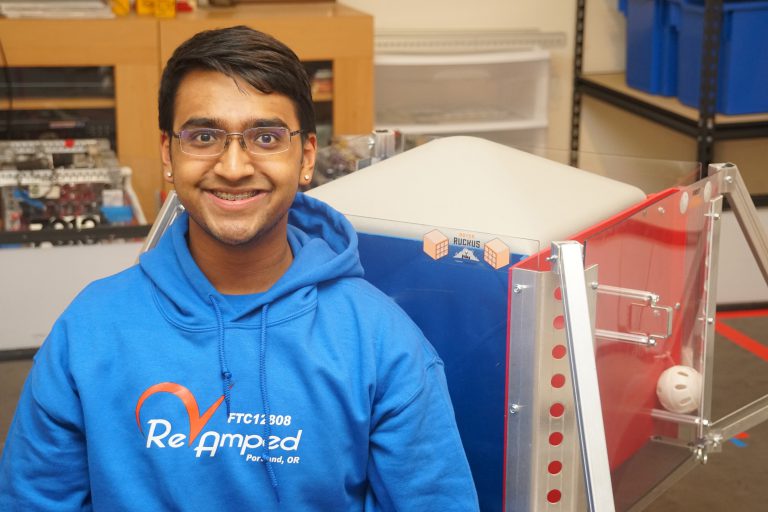 Shishir is a Freshman at Georgia Tech focusing on Biomedical Robotics.

FIRST had been a part of Shishir’s life for eleven years, starting from Jr. FLL in elementary all the way to FRC in High School. Along with FTC, Shishir was also the captain of his FRC team, Team #1510 the Wildcats, and the president of the Westview High School Robotics Club. During his FTC and FRC years, Shishir focused on the mechanical aspect of the robot, Strategic Design, Custom Fabrication, Competitive Analysis and Game Strategy.

He is very passionate about teaching newer students what he knows and pass down his extensive knowledge of FIRST and robotics. He is also interested in videography and video editing, and has created multiple robot reveals and award videos that have won awards in two consecutive World Championships at Houston. Apart from robotics, he loves to swim, cook and play drums.

Jack is a junior at Riverdale High School. He has been a part of FIRST for eight years and this will be Jack’s fourth year with FTC. Jack is looking forward to providing the team with a new perspective on design and competition analysis. He is an Eagle Scout and plays soccer for his high school. In his free time, he enjoys playing Magic the Gathering competitively. In robotics, Jack specializes in hardware design, advanced prototyping, alliance selection and guiding the hardware team. Jack is looking forward to a career in engineering. 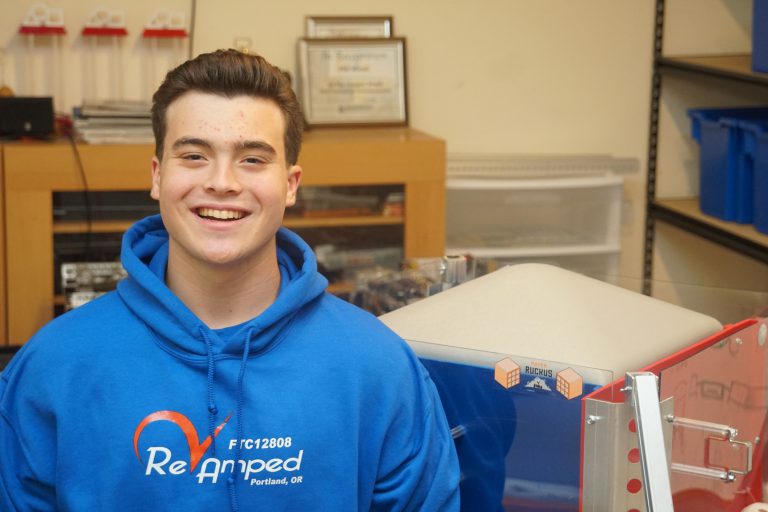 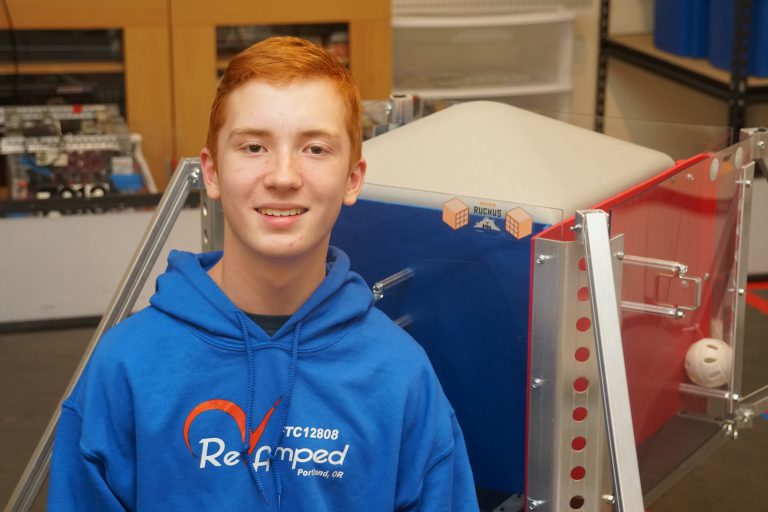 Ian is a junior at Beaverton High School. He has two years of FLL, FTC, and FRC under his belt and has a passion for engineering. Through FIRST, he learned much of what it meant to take initiative within a team and how to engineer effectively. In his free time, Ian enjoys racing drones, playing tennis, running a small business, captaining his high school’s science bowl team, and participating in MUN.

On the team, he spent much of his effort on design and CAD for the robot along with building it. He’s also trained new members to write the engineering notebook.

2018-2019 was his first year as a FTC member but had been a part of FLL for 3 years. He spends his spare time reading, playing video games, watching youtube, and doing math. 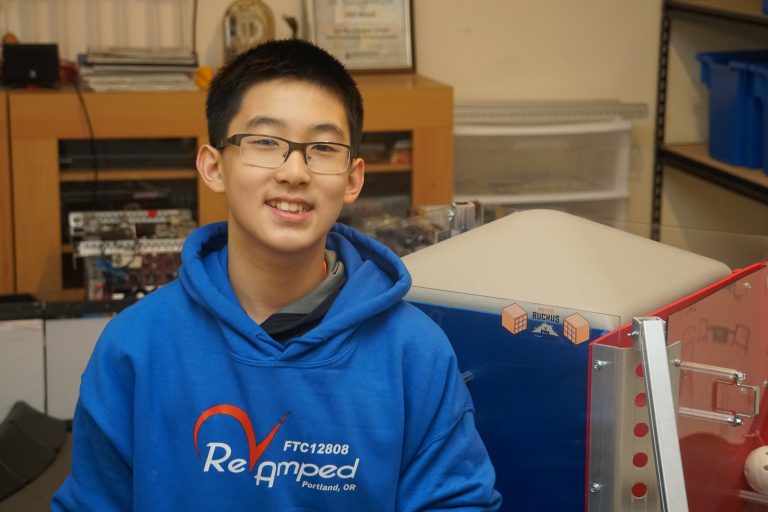